SATURDAY, SEPTEMBER 7
WILLOW ISLAND - $30
Events at Willow Island are ALL AGES and family friendly. Kids under 12 get in free, and must be accompanied by an adult.

SUNDAY, SEPTEMBER 8
WILLOW ISLAND - $25
Events at Willow Island are ALL AGES and family friendly. Kids under 12 get in free, and must be accompanied by an adult.

Black Thunder
https://blackthunder.bandcamp.com/
Black Thunder’s heavy psychedelia has been mutating in subterranean Regina Saskatchewan since 2009. Drawing upon the musical instincts of a trio of metal-and-psych-adjacent album hunters, their music builds in the borderlands between the labyrinths of progressive rock guitar riffs, boggy 70s hard psych basslines, and the amphetamine alleyways of proto-glam drumming.

Zoon
https://bloom14.bandcamp.com/releases
With a clear love of the early days of shoegaze (think Kevin Shields) and a romantic appreciation for all things Brian Wilson, Hamilton, Ontario’s Zoon are the harbingers of something new in this world. They have guitars, drums and other contraptions, yes, but it’s what they do with them that sets them apart. They sing too, often over each other – a cappella, like they used to do back in the day. They are “young and full of life” and subsequently so is their music, which often takes an ethereal reverbed out POP twist. ​

Dialtone
​https://dialtone666.bandcamp.com/releases
Dialtone is a collaborative effort of Amber Goodwyn (Natural Sympathies, Cobra & Vulture) and Piper Burns (The Steves, Hit the Streets). Formed in the midst of flight and yet to settle, Dialtone conveys the all-too-familiar feelings of waiting on the other end of line with nothing but your own warm breath to keep you company. The band will debut their songs and release their first EP on Willow Island during Swamp Fest 2019. Topics expected to be covered include: the sands of time, cyclopes, and fate.

DRI HIEV
https://drihiev.bandcamp.com/
Calgary industrial act, DRI HIEV, focuses on pure self-expression. Efficiently
blending electronic composition with punk rock urgency. Developing their sound for
over 5 years, they continue to experiment with non-toxic forms of assertion. With
each performance, DRI HIEV is ever willing to display their vulnerability and
prowess.​ 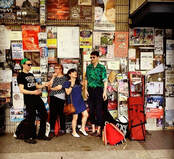 Energy Slime
https://energyslime.bandcamp.com/
Energy Slime is a synth pop band from Vancouver, but what is Energy Slime? I'm sorry to burst your bubble but it's just normal yogurt. 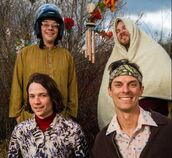 Lord Byron
Continuing in the bardic tradition, Lord Byrun cherishes and champions the inherent power of songs. Cutting his teeth as a member of Indigo Joseph, he is constantly working his craft by observing, learning and questioning. Having begun as a wordsmith, over the past 10 years he has slowly studied and taught himself guitar, bass, synthesizer, piano, and drums. Not claiming any virtuosity, he attests that curiosity and a sincere pleasure in playing and learning drive his musical quest. Known for his profound lyrics and intense deliveries, this student of the song holds it as his personal tenant to strive for excellence as a performer and composer.

Herb & The Humans
https://herbandthehumans.bandcamp.com/
Herb and the Humans are a three piece garage rock n roll ensemble from Regina, SK. Drawing influence from a SWAMP of rock, punk and blues artists, the Humans are coming for kicks so stay for the licks.

Kellarissa
https://kellarissa.bandcamp.com
Kellarissa is a classically-trained singer and synthesizer experimentalist who uses a loop pedal to expound on simple chord structures to create intricate pop songs. She sings about the vastness of the Universe, the mysteries of Nature and the beckoning of the sea. "Ocean Electro" is on Mint Records.

Let There Be Theremin
Three guys, a theremin and a dream. The band, consisting of K-Med on the drums, Stovey on the bass
and Dave on the guitar was formed about 2007, making their debut at the legendary Manhattan Room in Regina. Let There Be Theremin only plays instrumental surf style music.

Marissa Burwell
https://marissaburwell.bandcamp.com
Marissa Burwell is an indie act from the heart of Saskatchewan, known best for her captivating yet endearing performances in basements and coffee shops. On her self-titled EP we see an artist starting to find her sound and it is clear that she is on the verge of something special.

Mr Merlot
https://mrmerlot.bandcamp.com
MR MERLOT IS A FEELING, THE RUSH OF LOVE AND ENCHANTMENT AT THE CROSSROADS OF FUNKY POP. A BALEARIC DREAM AT THE EDGE OF CONSCIOUSNESS. MR MERLOT IS MADE UP OF ROBERT ONDZIK, JAY ARNER, JESSICA DELISLE, RICHARD SEXTON, TOM WHALEN, THOM LOUGHEED AND ADRIENNE LABELLE. 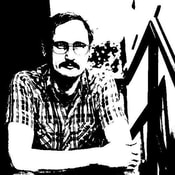 Psychic Pollution
https://psychicpollution.bandcamp.com
"There’s a cold neu future brewing and its nostalgic gurgles can be heard in the records of the increasingly prolific Psychic Pollution. Psych heavy and Kraut in scope with sporadic kosmiche sampling that fits somewhere in the Berlin School of electronic music. Noisy at times, but heavy in ambiance and minimalism." 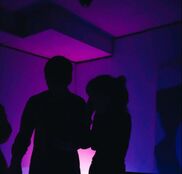 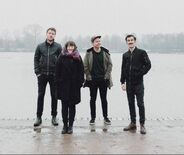 Scotch & Water
https://www.scotchandwater.de
Music helps you find inner peace – even in tough situations. You choose the right music for your specific condition. While listening to Scotch & Water you better be in an old trailer driving through a foggy and abandoned forest – just as lonely as you can be. Take your time, inhale, exhale, release the weight from your shoulders. These songs are about brutal honesty and restrained hopefulness.

Shirley & The Pyramids
https://surelyicomequickly.bandcamp.com
Shirley & The Pyramids are a 5-piece psych-rock band from Saskatoon, SK. Since forming in 2015, they've released two full-length albums, numerous EPs and played shows internationally. Their sound has been described as psych-punk with hints of shoegaze, drone & motorik. They are often compared to groups like The Jesus and Mary Chain and The Brian Jonestown Massacre.

Snake River
https://snakeriver.bandcamp.com
Snake River formed in 2014, and has released five full-length LPs, two singles and contributed to a number of compilations, and has toured Canada multiple times. The band’s most recent album, TREAD ON TO THE UNKNOWN YOU (2018) is an excursion into previously undiscovered sonic territory for the group. Like previous albums, TREAD ON... is set in the fictional town of Snake River Mountain, and features characters that listeners of the band will recognize. ​

Veneer
https://www.youtube.com/watch?v=oApvJKDYgyI
Veneer’s enchanting trifecta of sentimental souls create a universe of music that is soft, strong, and blatantly vulnerable. This multi-instrumental gaggle of creators is not your typical three-piece; accompanied by brass and woodwind instrumentals, and wielding six instruments in total, Veneer’s enticing harmonies and haunting hooks will have their tunes stuck in your head for days. 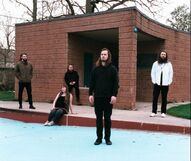 WHOOP-Szo
https://thenoisymountain.bandcamp.com
London, Ontario’s WHOOP-Szo is a blazing force of DIY rock. Fronted by Anishinaabe- Canadian community leader Adam Sturgeon, the band has spent nearly a decade carving out a reputation for themselves in Canada’s crowded DIY scene, rising on the strength of their musicianship, songwriting, and tireless touring.